Greetings from District 15 with part two of my November Blog: New Zealand . 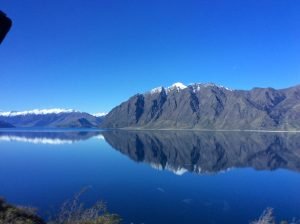 As mentioned earlier my wife and I took a trip to New Zealand in September-October  and had the opportunity to see some pretty amazing scenery and some incredibly warm people.  On our flight from Vancouver to Brisbane, I struck up a conversation with the gentleman in the aisle seat, whom turned out to be Worshipful Bro. McNeil.  We exchanged Masonic pins and spent a good hour just chatting about different aspects of the Fraternity until we landed in Australia.  I had slept most of the 15 hour flight over so hadn’t engaged in conversation as he’d had the same idea.

After a short layover, we continued on Quantas, one of the friendliest aircrew I’ve ever met, serving the best breakfast ever sampled on any aircraft!  Even served a second cup of coffee. Wow!

We landed in Christchurch and spent a few days there prior to our bus tour starting.  The earthquake devastation from 2010 is still very evident and new legislation has been brought in to bring buildings up to strict quake proof codes.  Due to this expense, many Masonic Lodges have gone into darkness due to the prohibitive cost of upgrading their structures 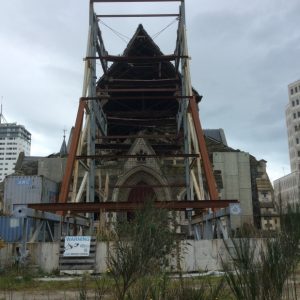 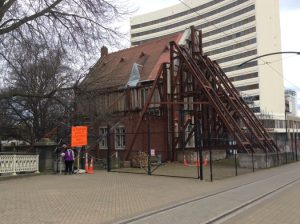 The bus tour commenced with a train ride up into the Southern Alps, through Arthurs’ Pass. Where we reboarded our bus and drove down the Pass to Franz Joseph Glacier .  The next several days saw us taking a  jetboat ride up the Haast River and then on to Queenstown, where I found the oldest Masonic Lodge in New Zealand, Lake of Ophir Lodge  No. 85 built 1863. Sadly gone into darkness due to Quake legislation.

We continued on through the Milford Track to a boat tour of Milford Sound, then headed back to the main road and Te Anua, a beautiful lakeside town. 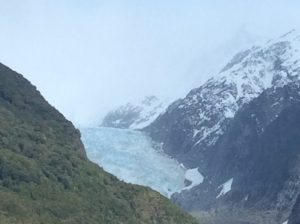 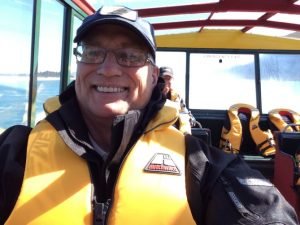 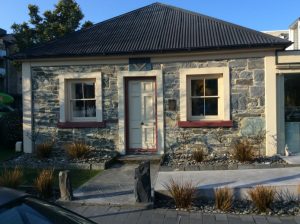 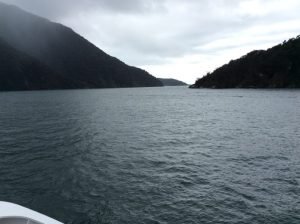 The next day was a fair drive to Dunedin to do a tour, walk about and overnight.  Next day was on to Waitiki, where I acquired a NZ Grand Superintendent jewel in a junk shop. There was a short stop to see the Moeraki boulders followed by a stop Omaru.  I found the Lodge but it was closed being Saturday. 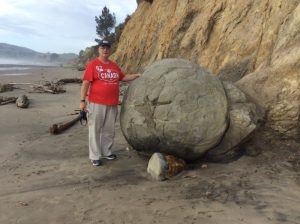 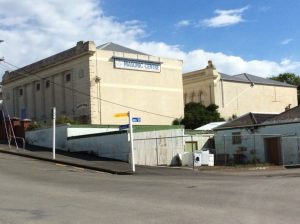 The Lodge in Omaru was built directly in front of an 1876 Masonic building designed by Thomas Glass,  and the only way to see it is through the Lodge building in front.  I tried to see it from the sides, with no luck.

We continued on to Mt Cook also referred to in Maori as Mt. Araki, to see the Tasman Glacier which is only accessible by boat.  We couldn’t get any closer as there is a 37 foot thick sheet of ice 200 feet wide waiting to break off under the lake.  It would cause a mini Tsunami, hence the caution of the tour guide.  He didn’t want to swim home. 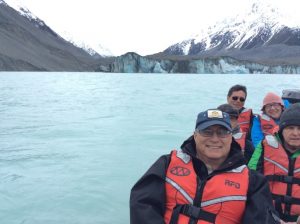 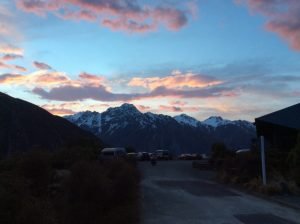 We returned to Christchurch, where after an evening dinner we said our farewells and headed to bed.  Picking up our vehicle the next morning we headed for Picton and the ferry to North Island. 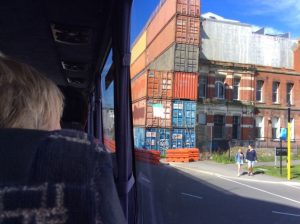 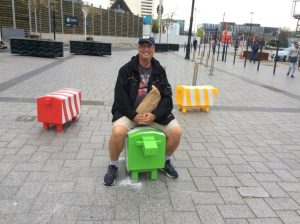 After a long day of travelling through the Lewis Pass up the spine of South Island, necessitated by the Quake seven years ago that dropped the main highway into the sea, we arrived in Picton.  The railway line to Picton had just reopened and  the main highway will open to traffic by Christmas.  This is great news as I wouldn’t relish the heavy vacation traffic on Hwy 7;   478 km from Christchurch to Picton.

All I can say about New Zealand roads is they are as narrow as Scotlands’ and when the sign says 35 kmh, you do 35!  40 would throw you over the cliff, of which there are plenty.   Hwy speed is 100.

After a short, very windy night crossing and then trying to sleep after disembarking in Wellington, we headed north to Rotorua.  I had been in contact with Duane Williams at the Grand Lodge of New Zealand in Wellington by email and set me up to meet with Geoff Mather, the W.M. of Lodge Rotorua 153.  I was also fortunate to be contacted by Dan Goodwin, here in Ontario whom had visited Geoff previously, so I knew what Geoff looked like from one of Dans’ photos. Geoff is the gentleman on the left with the warm smile.

Duane Williams was a Godsend,  as he was able to provide me with a large number of contacts during my travels as well as personally arranging for my meeting with Geoff.  I cannot begin to thank Duane enough for his help, without which any Masonic contact would have been minimal.  As it is, I’ve now made good friends for life, all through Duanes’ kind assistance. 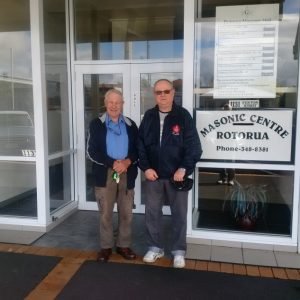 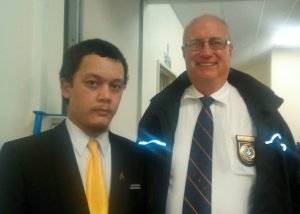 Geoff kindly arranged a tour of his Lodge building as well as taking me on 27th Sept. to Tauranga to visit Gate Pa no. 407 Lodge installation of V. W. Bro. Noel Whiley.  There I met with a large number of Grand Lodge members and an impressive young MM Josef Horopapera of Lodge Apanui No 395, where he is webmaster.  I also met the Past Grand First Principal of New Zealand, M. Ex. Comp. Geoff Davies, whom I was able to present with a Canadian Chapter lapel pin and received a NZ pin he removed  from his lapel in return!  I note with interest that two new members, Neil Page a F.C. and Jayden Kernaham, an EAM were presented with the other installed officers as the prospective Stewards. Once they are MM, they will be installed.

We went to visit Geoff and Tricia at their home for lunch, where Geoff presented more Masonic gifts than I could possibly bring home with me.  One was a memorial plate that would have looked great in our Masonic Temple here, but no room in the luggage.  Geoff also presented me with scarves that the Lodges present to their “Honoured Ladies”, a number of lapel pins and a copy of the NZ Masonic magazine.  (I forwarded a picture to the Magazine holding the copy in front of the Palisades of the Pijitawabik on Lake Nipigon ,  appropriate as there is also a Square and Compasses on the cliff face there.)

We spent a number of days in Rotorua, which is an area of thermal activity and hence the city has a distinct scent of rotten eggs.  We experienced a number of different activities; mud and sulfur baths; visiting active thermal mud pools in a city park, a Redwood tree walk 30 – 60 metres up;  wine tasting and supper at the top of a mountain via gondollas; feeding Red Deer at Geoffs’; Attending a Maori feast and educational experience at a Maori village; a Duck Boat tour of a variety of freshwater lakes in the area and the  Hobbiton Movie set by Matamata.  The Green Dragon Inn is not to be missed!

We then drove up to Auckland , the capital for a couple of days and thankfully turn in the SUV.  A lovely vehicle but the roads were so very narrow, compared to what I’m used to.  Fortunately it was an automatic and I didn’t have to shift with my left hand, like in Scotland 3 years ago! 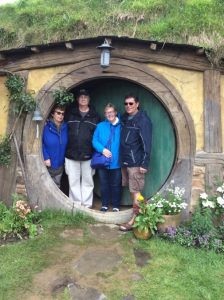 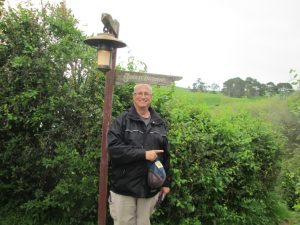 We toured a number of locales in the city; One Tree Hill; The Nautical Museum; Auckland Domain park gardens; The Quay; and the Harbour Bridge which had amazing cityscape views.  We settled into “The Fiddler”, an Irish pub, to watch people bungie pod at one end of the street and others do a tethered fall from the Sky TV tower.  Utter madness!  (Mind you, I bungeed in Calgary 25 years ago…)

We returned home via Sydney Australia to Vancouver then on to Winnipeg.  Joy felt we should head straight home and offered to drive first as I was still programmed for New Zealand.  She was right, we got in the car, turned onto the road and my frantic comment was:  “You’re on the wrong side, get over to the left!”  Despite,  I could see a truck approaching from the other way.  That made her day.

I was allowed to drive once we were on the divided Trans Canada and there were no issues getting home.

On our return, I was able to do an Official Visit to Shuniah Chapter and First Principal Ex. Comp. Robert Willett, several weeks later to see a well done MMM Degree.  I also got in some fraternal visits while in Thunder Bay:  First to Connaught Lodge No. 511, under the excellent hand of W.M. Tim King.  I also had the opportunity to visit Rhodes Preceptory No.23,  as a visiting Preceptor, also presided over by Em. Kt. Tim King.

I look forward to visiting the remaining Chapters both Officially and Fraternally in the coming months.

this is a test